Wavealee Laird and partner Jacqui Norris bought their small farm in South-West Victoria in December, but widespread fires in March burnt half of “Breezeholme”, including all the eastern boundary fencing and two internal fences.

Wavealee says, “Having sold our property before the fires it was really frustrating because we had about three weeks to get the new place re-fenced. I had to get something in the ground pretty much straight away to get the horses across and safe.”

Going through the options

The third-generation horsewoman went to her local reseller, where she had previously bought all her horse supplies.

“He took me through all the options. I really don’t like star pickets for the sheer reason that I’ve seen horses put them through their chest. So then I was looking at extra-high, seven-foot pigtails but I wasn’t going to be able to have them at the intervals that I wanted – I couldn’t afford to have enough; they’re expensive”.

Then Wavealee says her reseller showed her the Gallagher Insulated Line Post: He told her, ‘“We’ve got this brand-new thing in and they’re horse safe’”.

“They’re made out of flexi-fibre material, so the post flexed when he bent it and poked it into the wall. That really demonstrated that if a horse hit it,  instead of the post ramming through them like a star picket would, it would flex. He showed me they just go in with the sleeve and a post rammer. They were in my price range, so I could afford enough to have them at the intervals that I wanted. All that pretty much sold me.” 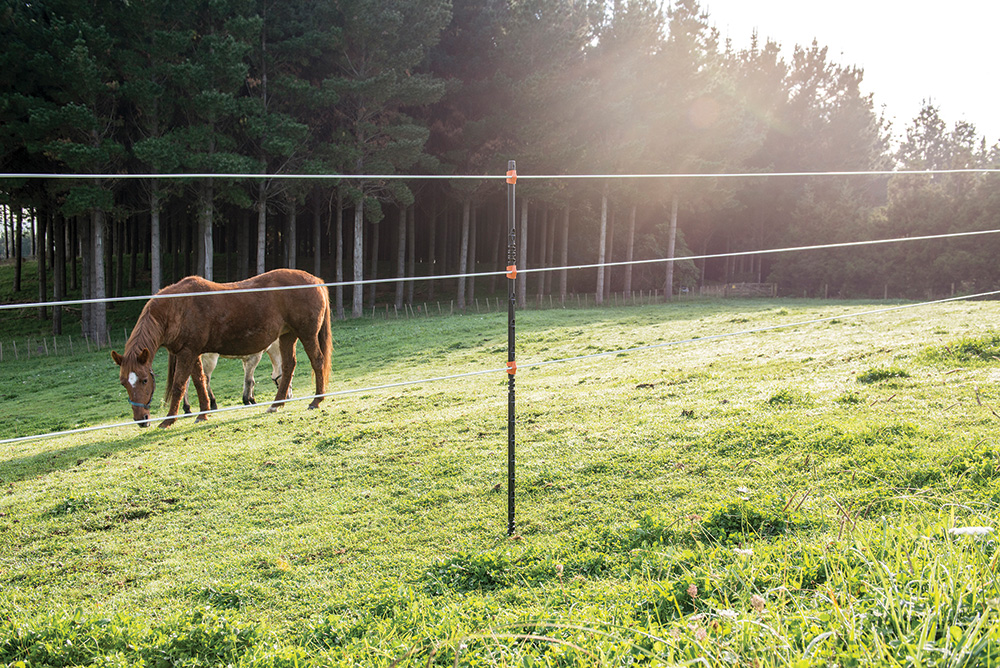 Putting up in the dark

“I was in a big rush to get it up. So even though it was after work and getting dark, I thought ‘we’ll put a couple in the ground to see how long it’s going to take us and how easy it is’.

“We did half that night and came back the next day and did the rest. Then
we strung all the wire up and turned the fence on and we had a boundary
fence again. So it made me really happy because I could move my horses.” “When we bought the property, we had a price for how much it was going to cost to use a particular type of internal horse fencing, and it was around 30 grand – so out of our reach. So we used the Gallagher Insulated Line Posts as our internal fences. We’ve got them dividing our acres up into horse-sized paddocks now. I really like it.”

“I definitely recommended these to all my other horsey people. I really have that peace of mind with these fences, knowing that if a horse runs at it, the worst thing that’s going to happen is slapping them on the backside on their way past.”

“I feel like the posts are weathering really well, too, so I’m probably going to get quite a long life out of them which is good.”

“So far, I’ve been really impressed with all of the products that we’ve bought: they’ve all exceeded expectations and they’re super user-friendly. And probably the most important thing, and why I bought them in the first place, is that peace of mind.”

For more information on the Gallagher Equine Fencing range including Insulated Line Posts, Equine Wires, Tapes and Braids head into your local CRT store. Plus, until 15th October 2018 purchase eligible Gallagher Equine products at your participating CRT store and go into the draw to win 1 of 2 John Deere XUV 560 Gators.