Risk management forms the base of an effective fungicide program for one of Australia’s oldest wineries.

Established in the 1850s, Seppeltsfield has an iconic cellar door in South Australia’s Barossa region, with vineyards based in the Barossa, Clare and McLaren Vale totalling 2265 hectares.

Seppeltsfield Vineyard Manager Kingsley Fuller is responsible for the company’s 1300ha Barossa vineyards, which is 70 per cent Shiraz, with the remaining vines made up of varieties such as Cabernet, Grenache, Riesling, Mataro, Palomino, Touriga and Nero d’Avola.

Kingsley has been managing the drip- irrigated vineyard for eight years and is very much proactive when it comes to controlling pests and diseases.

“It’s generally not too bad here. In a dry year we don’t have too many problems, but in a wet year we will be susceptible to most fungal diseases,” Kingsley said.

“I wouldn’t call it a high pressure region, however we still have to protect. Because we have many and various vineyards, we need to have an effective risk management fungicide program, rather than a reactive one.“

“In a small operation, labour, diesel and general tractor running costs may be a fairly minor consideration for spray applications, and while it’s all relative, when you increase the scale to our level, you can see why we wouldn’t want to spray any more than we have to.” 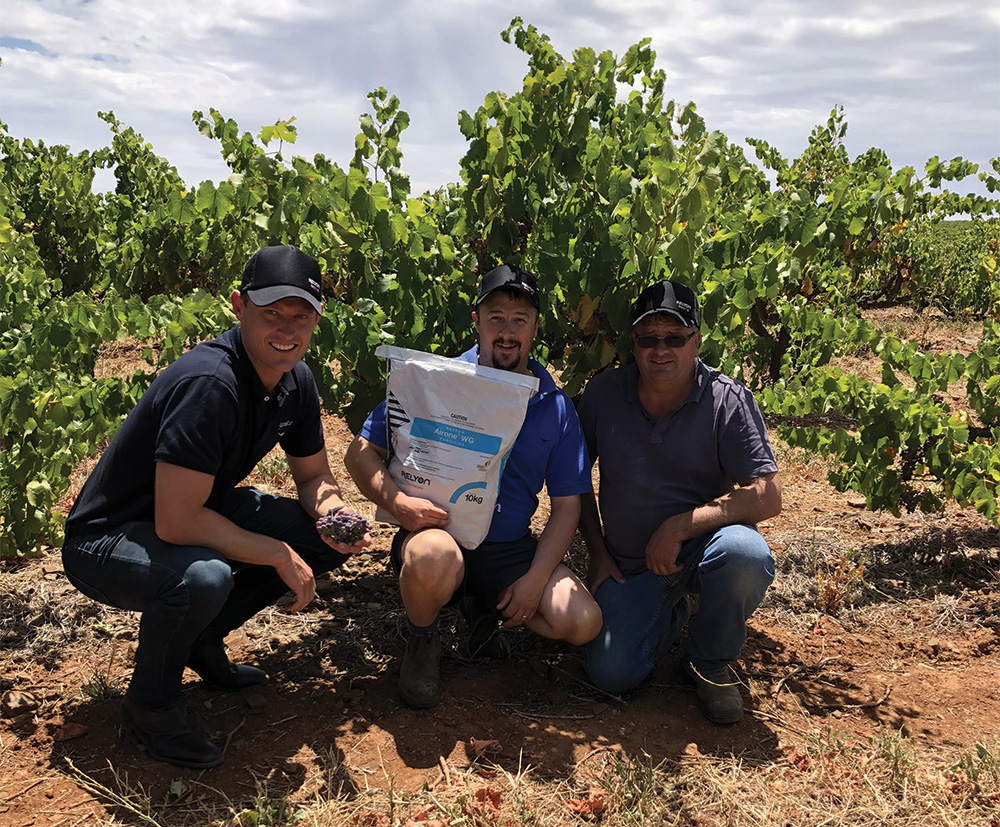 He said they operated 10 tow-behind spray units at the Barossa vineyard, completing up to six annual fungicide applications between October and December, taking 10-14 days for each application to cover all vineyards.

They predominately use copper and sulphur products, as well as azoxystrobin, to protect against powdery mildew and and downy mildew.

“The issue with downy mildew is that you might have the right conditions for it to incubate, but you won’t visibly see evidence that it’s there for another 10 days after. So if the conditions are conducive for it, we’ll probably spray copper for one to two rounds after that point to try and inhibit the problem from spreading further,” Kingsley said.

“We’ll generally apply three copper sprays up until post-berry set (E-L stage 31), but sometimes we’ll do an additional spray if the conditions call for it.

“If you get a perfect storm with downy mildew, then it can wipe out the majority of crop, so it’s worth being vigilant.”

Given the size of their fungicide program, Kingsley said efficiency was crucial, so selecting products that were easy to use as well as effective, was vital.

He said they introduced a new copper- based fungicide at Seppeltsfield this year, Airone WG by Relyon.

“It’s price competitive and the biggest point for us was the ease of usage.’’

“It’s compatible with other products and you can pour it straight into the spray tank without mixing into a paste or slurry beforehand, as some products require.

“When you’ve got 10 spray tanks running at one time, it’s so much easier not to need buckets or sticks on hand to mix. You can just tip Airone straight in the tank and keep moving.

“We haven’t had a lot of downy mildew pressure this year, but judging by how well the product sticks to the vine leaves, I’m expecting the efficacy in a high- pressure season to be just as good.”

Airone is based on a combination of copper oxychloride and copper hydroxide, in the form of water dispersible granules with quick action and long-lasting activity for the effective control of a range of diseases in vineyards, fruit trees and vegetables.

Kingsley said Airone was the most cost- effective option for controlling downy mildew, and they had also introduced the product at Seppeltsfield’s Clare vineyard with positive results.

“We were previously using a dry prill copper product, but value-wise I would think that Airone is certainly hard
to beat.’’

“It’s an important part of our fungicide program and essentially, it’s an insurance policy for us,’’ he said.