The seasonal nature of fly activity provides unique opportunities for strategic control that can significantly reduce fly pressure and reduce the risk of flystrike.

Treating sheep early in the season with an effective and long lasting chemical removes the host environment required for the flies to reproduce and prevents fly numbers from building up.

In some ways, early season treatment for fly prevention provides long-term benefits in the same way that summer drenching can provide long-term benefits for worm control. Both strategies exploit a weak point in the natural life cycle of the parasite and take advantage of environmental conditions at those times.

The Australian sheep blowfly Lucilia cuprina is the primary fly species responsible for initiating flystrike in sheep in Australia, and this species is largely dependent on sheep as a breeding resource1 – with female flies laying eggs in moist wool subsequent to a protein meal and mating. After hatching, fly larvae then moult through three larval stages (also known as maggots) and eventually leave the sheep to pupate in the soil.

The blowfly lifecycle takes 2.5–3 weeks2 – with some variation depending on exact environmental and soil temperatures. Fly numbers can therefore build up very rapidly under suitable environmental conditions, assuming susceptible sheep are available as a breeding resource.

In cooler conditions at the end of the fly season, development is inhibited or “arrested” at the pre-pupae stage and development is not resumed until conditions are again suitable. The increase in soil temperature in spring in south-eastern Australia has been shown to trigger synchronous emergence of the first generation of flies for the new season3, regardless of exactly when the larvae were deposited.

The re-emergence of flies at the start of the fly season will vary depending on the actual temperatures experienced4. 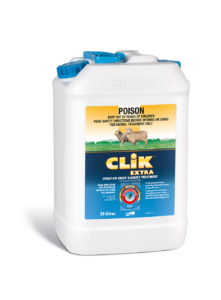 This strategy has been demonstrated to work very effectively to reduce the risk of flystrike on commercial sheep farms in different regions and over a number of years with varying seasonal conditions5.

Chemicals used for this purpose have to be relatively long-acting to suitably cover the full period of spring emergence3 – especially in years with a late or delayed start to the fly season due to seasonal conditions – and to have peace of mind that sheep will remain protected right through the season.

As highly effective products that provide long lasting protection from flystrike, CLiK and CLiK Extra from Elanco are ideal for strategic treatment. These products contain dicyclanil, a potent insect growth regulator (IGR) that works by stopping larval development between the 1st and 2nd larval stages, before the larvae have developed damaging mouthparts, effectively breaking the fly lifecycle.

Having confidence that the product applied will work and that prevention will be maintained for as long as possible throughout the fly season is critical – making CLiK and CLiK Extra logical choices for strategic control.

This unique formulation has a registered protection period of up to 29 weeks, providing season long protection with a single application – and additional confidence that prevention will be maintained regardless of the season. CLiK Extra will be ideal in those regions that experience long or unpredictable fly seasons – or significant fly pressure during autumn – allowing early or “fixed-date” treatment in all environments with less risk that protection may “run-out” later in the season.

Flies are not capable of moving long distances, so the success of early season treatment can be even further enhanced if all sheep on a farm are treated, if neighbours treat as well and/or if flocks are physically isolated5.

The good news for farmers is that strategic fly control does work, as supported by rigorous field research.1,3,5

CLiK and CLiK Extra make strategic fly control possible and highly effective – with CLiK a proven strategic treatment option under all sorts of conditions for nearly 20 years – and CLiK Extra providing even more coverage than ever before.