Processor margins have increased dramatically in this last quarter, sitting significantly higher than historical averages. The large margins have been linked with the low rainfall patterns that have occurred this year. Similar conditions were seen in 2013 and if that is anything to go on the Mecardo theoretical cut-out model is projecting firmer processor annual margins, like that which were seen during 2013-15.

According to the Bureau of Meteorology (BOM) similar rainfall patterns occurred in 2012-13 and 2017-18 with severe dry conditions all around the eastern end of Australia. 2012-13 saw these severe conditions affect the entire eastern region whilst 2017-18 seems to be greatly affecting the central eastern and south-eastern regions. 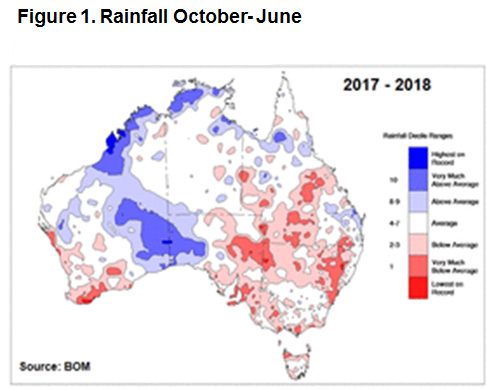 With the combination of dry conditions and the “grilling season” in the US, it is quite likely the coming quarters should remain strong for processor margins. The January margin in 2018 began at $45/head and throughout the quarter has never exceeded $65, 2013 values also began low with margins ranging from $28-$39. After the initial slow start, both 2013 and 2018 margins rose dramatically hitting quarterly highs in May at $203 and $263 respectively. 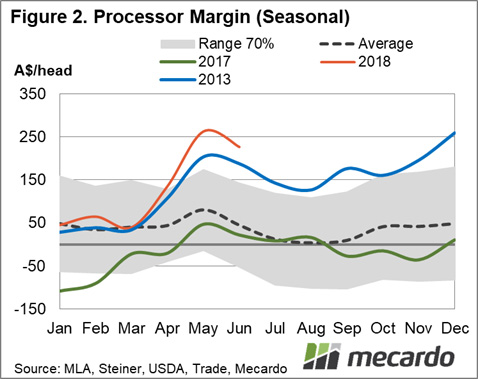 From Figure 2 we can see that the seasonal margins for 2013 and 2018 follow a similar trend, they both started near the average and dramatically increased April onwards. It is likely that this year, with the combination of dry conditions and the increased rate of herd liquidation, that processor margins will remain robust. This trend has occurred before, during the cattle turnoff in 2013-2015 where processor margins were significantly higher than average, 2014 being the strongest year with $298.83/head.

The shortage of rainfall has also increased the culling rate of females, as we have now entered a herd liquidation phase. As projected, should the following quarter remain dry we could see any even larger increase in the slaughter ratio of females.

What does it mean? Drier conditions result in lower feasibility for grazing leading to increased slaughter rates. From Figure 3 we can see that the high female slaughter ratio is correlated to the high margins that processors are currently experiencing.
We can also see that during 2016-17 processors saw negative margin periods due to wetter conditions generating a herd rebuilding phase. Whilst the 2013- 15 periods saw robust profits due to dry conditions creating a herd liquidation phase, like what we are experiencing right now. The dry forecast leading into Spring issued by the BOM should continue to support firm processor margins into the second half of this year.

N.B – Input data to the Mecardo cutout model, such as beef export prices/ cutout values and co-product prices, can be revised post reporting each month. These amendments can sometimes see the previous monthly margin figures revised to factor in the input revisions.

It doesn’t just report the market news – Mecardo explains what’s driving the market, helps to understand what’s important and what it means for the reader. The client base of Mecardo is spread across the agricultural landscape, including producers, processors and consumers of Australian agricultural commodities, both domestically and internationally.

0Shares
Previous PostWhen your business is ready for the future, you’re ready to winNext Post‘Horse-safe’ Gallagher Insulated Line Posts quickly and simply fit the bill for peace of mind